by A Big Yes and a small no 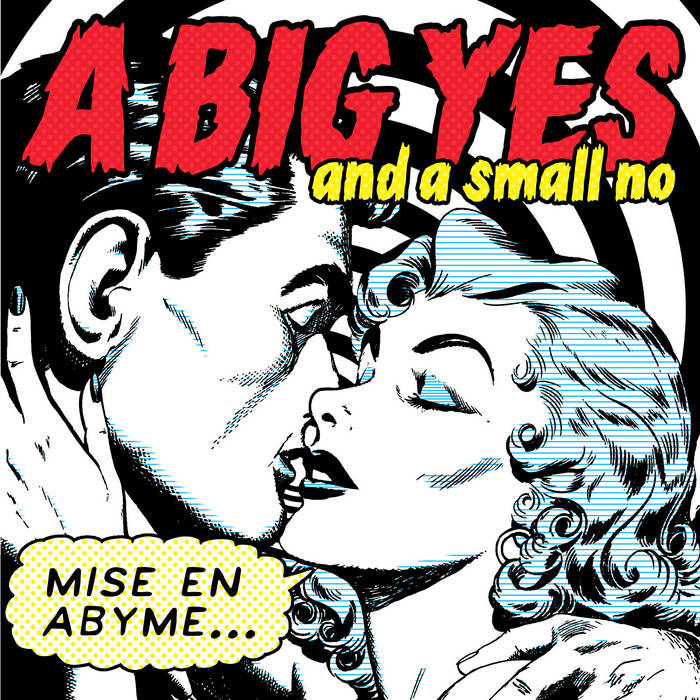 “One of the beautiful things about playing music is the gentle reminder of your own mortality that comes with creating something out of nothing, and knowing that the moment you stop playing, it will cease to exist” says Kevin Kendrick, frontman and founder of Brooklyn’s A Big Yes and a small no. “A record is so-called because it is, literally, a record of that moment; so it doesn’t cease to exist.” Mise En Abyme, (literally “placed into abyss” ), A Big Yes and a small no’s third album due out April 20th on Royal Potato Family records is, not surprisingly, VERY existential.

Existentialism seems natural for a songwriter whose destiny in a symphony orchestra (he studied at the famed Interlochen Arts Academy and won a full scholarship to college as a classical percussionist) seemed a given until he was kidnapped in Colombia in 1997. Terrifying though it was, it gave him clarity and hastened a move to touring as a hip-hop DJ and a vibraphonist with freak-jazz band Fat Mama. Someone who has survived 7 muggings (one of which required facial reconstruction surgery) and only picked up the pen in his late ‘20s after finally winning a protracted “war” (his says “battle sounds too easy”) with heroin WHILE studying composition at the prestigious University of Bristol in the U.K. has thought a lot about existence.

“When I first got back from Colombia, after being tied up in the jungle by a psycho named Jesus, everything was just roses. But honeymoons always end. The same thing happened after I finally beat heroin. I was in New York, clean, starting a band, and having the time of my life. You can hear that on the early Big Yes records. They’re so manic! This is the album where I learn that there’s actually so much to appreciate about being alive beyond just appreciating being alive.”

And all of that and more is on Mise En Abyme. One of the album’s standout tracks, “I’m Gonna Die One Time,” is a haunting confessional about a heroin relapse he had after he moved to NYC in 2005 and the hit he took spiritually as a result of it: “I just need someone to atone with / These thoughts here are a lot to be alone with / It’s a short ride, to a fast either/or…then I’ll die one time and I ain’t gonna die no more.”

“I made a lot of casual references to my addiction on my previous album, ‘Jesus That Looks Terrible On You’, with a little wink and a nod, like it was no big deal. This song was the first time I admitted it WAS a big deal,” Kevin confesses. “After working so hard to get clean, slipping up was devastating to me emotionally.”

“Stranger Things,” a raucous tune roughed up perfectly by revered drummer Joe Russo (who has played in the band since 2008), reminds us why Blurt Magazine said of A Big Yes and a small no, “like great pop music from Burt Bacharach or Brian Wilson, the virtuosity is hidden and designed to seem effortless.” But unlike the earlier songs where cleverness and tongue-in-cheek lyrics were used as a way of keeping the listener at arms length, here the lyrics are very personal. “A walk with Jesus that wasn’t by choice / and so much dope it was killing my voice / some cries for help don’t even make noise / when the basement floods and the attic fills with toys.”

“That song basically tells my life story if you listen closely,” he laughs. “That’s why I was so meticulous; why the album took 5 years to make. If you’re going to really talk about yourself, you want to make sure you get it right.”

Which is not to say the clever, tongue-in-cheek lyrics aren’t here. That wit which made AM New York gush of their previous recording, “what makes this album so great is the clever lyrics,” still abounds. “Enough is Enough”, a clear single contender with a sound that is anchored by a ‘70s drum loop that would be equally at home on a ‘90s hip-hop record, is a perfect example. “Brooklyn forever / at least until I’m priced out / You gotta buy and buy, this American Pie / if you want to cut a slice out”.

“I have always said the best lyricists of my generation in terms of metaphor, double entendre, and cadence, are underground hip-hop MCs like Aceyalone of Freestyle Fellowship. The best lyrics pay dividends to the listener if he or she not only listens to them, but digests them and looks for hidden meanings and references.”

And just as on the first two albums, references abound. The beautiful and dreamy title track, “Mise En Abyme” makes references both Jean-Paul Sartre (who coined the term “mise en abyme”) and the F. Scott Fitzgerald short story “A Diamond as Big as The Ritz”.

It’s no surprise that someone with as varied a background as Kevin Kendrick would make records as multi-faceted as A Big Yes and a small no does, but Mise En Abyme is the newest and best example. “Amazing Grace” is a creepy, minor arrangement that makes the listener to look at the traditional lyrics in a new light. Right after the raucous indie-pop-punk fun of “We Talk Too Much” (think early Jawbreaker) is “Photo Finish,” a bonafide big band tune complete with vibraphone (Kevin’s primary instrument), a barn-burning piano solo courtesy of bandmate Erik Deutsch, and a big horn section. It might sound like a Sinatra tune if not for lyrics like, “cleanliness is next to godliness…so wash, rinse, and REPENT!”

“The same way a record documents a musical moment, I feel an artist’s body of work is a record of his or her moment on Earth. I have always said I would rather have a few records I am very proud of then lots of records I’m not that attached to.” Kendrick means what he says. After a five year wait, A Big Yes and a small no returns. It’s now a matter of record.

A Big Yes and a small no New York

A Big Yes and a small no was formed by Kevin Kendrick in Brooklyn, NY, in 2006.

Bandcamp Daily  your guide to the world of Bandcamp

Khruangbin and Greg Foat stop by with their amazing new LPs.